Blog
You are here: Home1 / Blog2 / Creeds and Confessions3 / The Apostles Creed 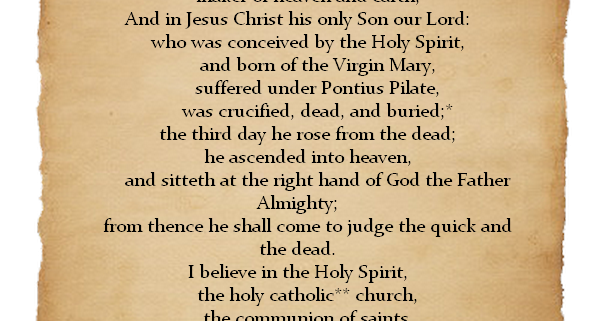 One of the most important confessions produced by the Church, the Apostles’ Creed continues to be used today as an orthodox confession, as a teaching outline, as a summation of the Christian faith, and more. It has maintained in modern times its distinction as the most widely accepted and used creed among Christians.

I believe in God, the Father Almighty,
the Maker of heaven and earth,
and in Jesus Christ, His only Son, our Lord:

Who was conceived by the Holy Ghost,
born of the virgin Mary,
suffered under Pontius Pilate,
was crucified, dead, and buried;

He descended into hell. [See Calvin]

The third day He arose again from the dead;

He ascended into heaven,
and sitteth on the right hand of God the Father Almighty;
from thence he shall come to judge the quick and the dead.

I believe in the Holy Ghost;
the holy catholic church;
the communion of saints;
the forgiveness of sins;
the resurrection of the body;
and the life everlasting.

The Protestant Reformation
Scroll to top