In the Beginning – God

(Excerpt from The Basics of the Reformed Faith – by Kim Riddlebarger)

The Bible opens with a remarkable statement in Genesis 1:1 – “In the Beginning, God . . .”

This simple assertion is packed with meaning. Some of the most fundamental truths of the Christian faith are found in this short declaration, and it is important to give them due consideration.

The first thing this passage tells us is that before anything was created, God already was. In fact, God always was, without beginning or end. Since God alone is uncreated, we speak of him as eternal. God exists before time itself, and is not bound by the succession of moments (time) as are we.

As the creation account unfolds in the subsequent verses of Genesis 1, we learn that the eternal God creates all things. Whatever now exists, exists only because God created it. There is no such thing as eternal matter. There is no eternal realm of mental forms (or ideas) as Plato led us to believe. There is no eternal convulsing of matter – ever expanding, ever contracting – as taught in much of contemporary science. There is only the eternal God who created all things, and who already was in the beginning. This indicates that nothing exists apart from the will of God, and all created things (the heavens and earth, humans as well as angels) are necessarily contingent, and depend upon God for their existence. 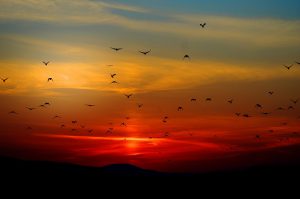 Unlike his creatures who are bound by both time and space, God has no such limitations. Because God is unlike us in this most fundamental way, he must be distinct from that which he has created and can in no sense be dependent upon created things. God has no needs, as do we. God has no parts, as we do. Although he is personal, he does not have the kind of passions or emotions that we do as creatures. This is the God who gives orders to the sun and the stars, who gives life to inanimate matter (as when he made Adam from the dust of the earth – Genesis 2:7), and who is Lord over death. This God utterly transcends his creatures.

This “otherness” of God – the distance between God and his creatures – is known as Creator-creature distinction. This distinction is one of the most fundamental points of Christian theology, and must be clear to us before we can meaningfully talk about any other aspects of the Christian faith.

How can finite creatures, bound by both time and space, and prejudiced by sin, truly know and correctly understand anything about a God who is so transcendent that he cannot be seen or observed? The answer to this dilemma is that such an infinite God cannot be known by his finite creatures, unless and until he chooses to reveal himself to his creatures in such a way that we can know and understand this revelation. This is exactly what God does through both nature (general revelation) and Scripture (special revelation), when God draws near to reveal himself to us (immanence).

As creatures, we will always be dependent upon God for our very life and breath. But we are also dependent upon his self-revelation if we are to have any meaningful knowledge of him. The realization of this fact is the beginning of a proper understanding of spiritual things. And this is why we must strive to understand who God is by directing our attention to those two places where God reveals himself – through that which has been made (the natural order) and through the supreme revelation of himself in his word (Scripture).

Canons of Dort: Articles 2 and 3
Scroll to top