(Excerpt from The Basics of the Reformed Faith – by Kim Riddlebarger)

With the language of the eighth Psalm clearly in mind (“you have made [man] a little lower than the heavenly beings and crowned him with glory and honor” v. 5), Reformed theologian Cornelius Van Til once declared that Adam was created to be like God in every way in which a creature can be like God. These words sound rather shocking when we first hear them. And yet as Van Til goes on to point out, because Adam is a creature, he will never be divine. Adam will always be a creature. Therefore, Christians cannot talk about the creation of humanity without first being clear about the fact that God is distinct from his creation, and cannot be identified either with the world around us or its creatures. 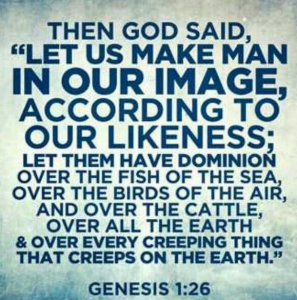 That said, the biblical account tells us that Adam was created in God’s image (Genesis 1:26), which indicates that Adam is neither divine, nor the product of some unspecified primordial process. Adam was created by a direct act of God in which Adam’s body was created by God from the dust of the earth, while his soul was created when God breathed life into the first man (Genesis 2:7). The divine image extends to Eve as well (Genesis 2:4-24). To be human then, is to be male or female and to bear God’s image in both body and soul, which exist as a unity of both spiritual (the soul) and material (the body) elements. To be a divine image bearer is to be an ectype (copy) of which God is archetype (original).

Because all men and women are divine image-bearers we are truly like God, and we possess all of the so-called communicable attributes of God albeit in creaturely form and measure. This is what constitutes us as “human” beings, distinct from and superior in moral and rational capabilities to the animal kingdom. In fact, the creation of Adam and Eve marks the high point of the creation account (Genesis 1:28-31), as God pronounced the first man Adam to be “very good.”

The ramifications of the fact that we are divine image bearers are multifaceted and profound. First, the creation reveals that Adam is both the biological and federal head of the human race. To put it another way, Adam was the first human being, and all humans are his biological descendants. This speaks directly to the question of the unity of the race (despite our different skin colors and physical appearances), and to the equality of persons before God. Second, as the biological head of our race, Adam represented the entire human race before God during the period of probation in Eden when Adam was commanded not to eat from the tree of the knowledge of good and evil.

Adam was assigned the role of acting for and on behalf of all those who are his descendants. What Adam did in Eden, he did on our behalf, as our representative. This fact alone implies a number of additional considerations, including the fact that Adam was created in righteousness, holiness, and possessed true knowledge of God (cf. Ephesians 4:24; Colossians 3:10), which means that Adam was righteous before God as created. Adam was not merely innocent before God, but holy and upright, possessing the natural ability to obey all of God’s commands and to fulfill the cultural mandate (Genesis 1:28).

The spiritual nature of Adam (as seen, for example, in the fact that the soul lives on after the death of the body) further reflects this element of human nature. Our souls are invisible, indivisible, and immortal. In addition, we are created as rational beings with great intellectual abilities, as well as the moral ability to determine right from wrong (Romans 2:12 16). This also indicates that all men and women are capable of receiving the revelation that God gives through the created order (general revelation) and through his word (special revelation). Reformed theologians have long argued that our bodies are fit “organs” of the soul. And it is especially through the body-soul unity that these communicable attributes are manifest.

This is what the Psalmist means when he says that man is but a little lower than the angels (Psalm 8:5). The creation of Adam was the high point of all of God’s creative activities, not an after-thought. As the divine-image bearer, Adam is to rule and subdue the earth in the name of his creator. He possesses true righteousness, holiness, and knowledge, and his task is to build the temple garden of God on earth in Eden. And he is fit for the task in every way.

Discipling Every Generation
Scroll to top