The article below is from Ligonier’s Tabletalk Magazine. Tabletalk is an incredible resource with monthly resources packed full of sound theology from some of the most gifted Christian leaders. This article in particular addresses something every parent can relate too, and that’s the state of our children’s salvation.  Ultimately we are to remember that, “Whether we’re the first in our families to believe or the latest in a long line of faithful followers of Jesus, each of us is saved by the same gospel in the same way: by grace alone through faith alone.”

Of all the things I feared about parenting, I never expected my greatest fear would be my kids’ assuming they’re Christians.

My wife and I are first-generation Christians. For us, there are no memories of Sunday school crafts, flannel graphs, and fishy crackers. No “Jesus Loves Me” or “Father Abraham” songs floating up at random moments. No Bible drills, no missions trip T-shirts, and no regular warnings about the dangers of premarital sex. I was so unexposed to the Christian subculture that I hadn’t even heard a Steven Curtis Chapman song in its entirety until 2015. I say all this to make it clear: for us, the Christian life is a blank slate. We have no idea what we’re doing in general, but especially what we’re doing as parents raising children in the hope that they will someday love, honor, and serve Jesus.

A friend of mine’s experience is entirely the opposite of mine. He isn’t the first Christian in his family. He is a pastor’s kid whose father was also the son of a minister. He knows how to check off all the boxes. He knows all the answers he should give when answering Bible questions. He didn’t just attend but led a youth ministry. The expectations on him as a member of a family with a heritage of following Christ were, and continue to be, very different from my own. Considering his family’s legacy, some people would identify him as a fourth- or fifth-generation believer. 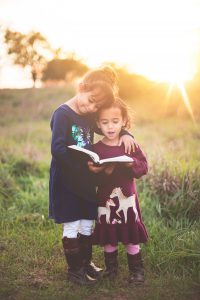 But in talking with him, and with other friends, I’ve come to realize that this isn’t right. It’s not how the Christian faith works, and it never has been. God doesn’t appear to see any of us as second-, third-, or thirtieth-generation believers. Although there are many families—and I pray mine will be one of them—that have a long line of faithful believers among them, not a single one of them inherited the Christian faith. Every single believer in these long lines was saved the same way: by grace alone through faith alone (Eph. 2:8). Whether they can pinpoint the exact moment they believed or if believing was as natural as breathing, all believed, and through that belief alone they were credited with the righteousness of Christ (Rom. 4:3). No matter how many believers have preceded us, every Christian is a first-generation Christian.

No doubt many of you reading this are thinking: “Well, yeah. After all, the doctrine of justification by faith is at the heart of the Christian faith. It is what makes Christians Christian.” But do we approach others, especially our own children, as though they need to be justified by faith, too, no matter how many generations of believers may have preceded them? And, most importantly, what happens when we do approach them in such a way?

And if our kids do become believers, it’s not because we’ve got it all figured out but because God has been gracious to us.

Our focus will be on hearts before behavior. Because we can’t be born into the Christian faith—only born again (John 3:7)—we can’t make assumptions about the state of anyone’s hearts. And it’s the heart that needs to be our focus, which means that we must reject biblical moralism, the idea that Scripture primarily teaches us how to behave, instead of in whom to believe. Without diminishing the need for moral instruction, this moralism should terrify us. And both as a parent and a teacher in our church’s kids ministry, the last thing I want to do is place a burden—that they are able apart from grace to obey the Lord—on them that they were never meant to bear. Instead, I want them to know about God’s great love for them in Christ, that it is Jesus’ righteousness given to us by faith alone that allows us to stand before the Father as beloved children, and that our behaviors are in response to the new life and desires given to us by God the Holy Spirit.

Our humility will increase. This approach kills our pride as teachers—and as parents. It challenges us to repent to the young people around us when they see us acting out of step with the gospel. It encourages us to own our sinfulness in general with our children, helping them see that we need the gospel too. And if our kids do become believers, it’s not because we’ve got it all figured out but because God has been gracious to us.

Our hope is in the sovereignty of God. Just as this approach encourages us to own our lack of ability to “make” our kids Christians, it also puts our hope squarely where it belongs: in the sovereignty of God. When Scripture says “salvation belongs to the Lord” (Ps. 3:8), it’s true of our kids’ salvation too. We’re responsible to be witnesses to them, to proclaim the gospel consistently and patiently, to liberally sow seeds as Jesus encouraged in His parable (Matt. 13). But only God can make those seeds grow.

Whether we’re the first in our families to believe or the latest in a long line of faithful followers of Jesus, each of us is saved by the same gospel in the same way: by grace alone through faith alone. As we share the gospel, especially with the next generation of our biological families, let’s do so with this mind-set. Let us focus on their hearts, in humility and with full confidence in the sovereignty of God, and be ready to meet the next generation of first-generation Christians.

Aaron Armstrong is brand manager of The Gospel Project, author of several books, including Awaiting a Savior and the upcoming Devotional Doctrine, and screenwriter of Luther: The Life and Legacy of the German Reformer.